Registration for Part I Examination

Development of the Helsinki Declaration

Starting in June 2009, representatives from the European Board of Anaesthesiology (EBA) and the European Society of Anaesthesiology (ESA) set up this document and many individuals and representatives of national societies have been involved in the drafting and development of this Declaration. The first draft was discussed in a meeting in London with representatives from all over Europe in November 2009. Following that it was finalized by involving all EBA representatives as well as the ESA Board of Directors. The Declaration in its present form is the result of a consensus between both the ESA Board of Directors and the EBA and it is signed by all ESA member societies, represented in the NASC.

Principles and aims of the Helsinki Declaration

The Declaration builds on earlier statements about safety and quality of care. It represents a shared European opinion of what currently is both worth doing and practical to improve patient safety in anaesthesiology in 2010. The Declaration recommends practical steps that all anaesthesiologists who are not already using them should include in their own practice. These are relatively straightforward and where they are currently being used have a track record of improving patient safety. All European anaesthesiology institutions are expected to support the World Health Organisation (WHO) ‘Safe Surgery safe Lifes’ initiative including the “Safe Surgery Checklist”, where anaesthesiology plays an important role and where other safety recommendations are made. The Declaration was endorsed by EBA and ESA. It was officially launched at the Euroanaesthesia congress in Helsinki in June 2010 and was subsequently signed by several representatives of European anaesthesiology and other stakeholders (WHO, World Federation of Societies of Anaesthesiologists (WFSA), European Patients Federation (EPF). The EBA and ESA have established a Patient Safety Task Force to take forward this work by providing the tools and protocols anaesthesiologists might need to help them fulfil their obligations under the Declaration. 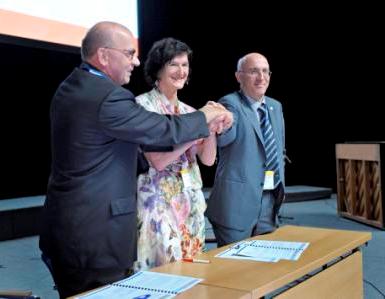 This declaration emphasises the key role of anaesthesiology and intensive care in promoting safe perioperative care.

We invite anyone involved in the healthcare industry to join us and sign this declaration.